One of the most common applications of CMM’s is the measurement of features of size such as cylindrical holes and bosses. This article will examine the details of size requirements are defined in the ASME standard, and how CMM software may (or may not) verify these requirements properly.

One of the core principles of the ASME Y14.5 Dimensioning and Tolerancing standard is that size tolerances also control form. For a cylindrical feature of size, the form characteristics circularity, cylindricity, and straightness are controlled without an explicit form tolerance being specified.

How is the form control applied? It is an indirect consequence of the two aspects of the size specification in Y14.5:

a. The Actual Local Sizes (opposed 2-point distances) of the feature must be within the specified range of size.

The functional intent of this combination of requirements is to allow a maximum amount of form error while ensuring that the feature will have clearance with a mating part feature.

Let’s examine the example of a solid cylindrical feature (boss) with a size tolerance of 100 +/- 10. The requirements would be the following:

This combination of requirements limits the worst-case form error of the feature. For example, an ovality condition can only be so extreme (left figure below) before it breaks the A.L.S. or A.M.E. requirement (right figure below): 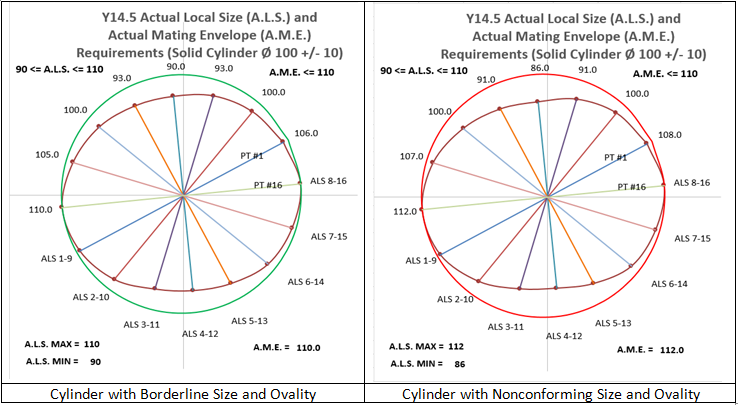 The increased ovality results in nonconforming conditions on both the A.L.S. (below lower limit of 90 and above upper limit of 110) and the A.M.E. (above limit of 110). This is how the size tolerance indirectly controls form. The worst-case error in any applicable form characteristic is equal to the range of sizes allowed by the size tolerance. In this case Circularity, Cylindricity, and Straightness are controlled within a worst-case value of 20.

Unfortunately, these functionally-derived requirements can create difficulties in CMM inspection. Most CMM software can be programmed to evaluate Actual Local Sizes and the Actual Mating Enveloped, but this is generally not the default. The default method for size measurement in most software is the Least Squares algorithm, that does not directly correspond to either of the two Y14.5 requirements. Least Squares calculates one measured size value, that is simply compared to the size tolerance. If used as the only criteria for size assessment, the Least Squares algorithm can miss several things from the Y14.5 requirements: 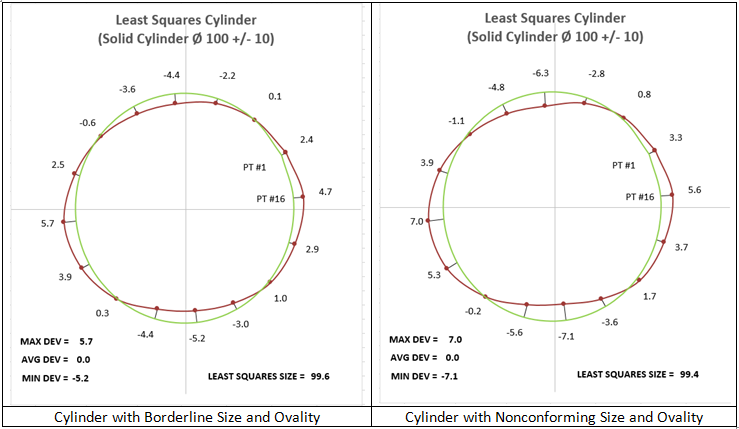 The Least Squares algorithm was chosen as the default in CMM software mainly because of its ease of computation, stability, and insensitivity to outliers. But it definitely does not follow the rules of Y14.5 GD&T, that are based on functional contact on extreme points.

In addition to the Least Squares default, most CMM software also offers other algorithm choices. Most software contains Minimum Circumscribed Cylinder and Maximum Inscribed Cylinder algorithms that calculate the Actual Mating Envelope size. Actual Local Size calculation is much less common, and the hit points must be arranged in opposed pairs to work correctly. In some cases, custom programming is necessary.

The next article will examine further examples showing how form is controlled by size tolerances using the Y14.5 rules. Examples will also be given for additional characteristics can be added to the CMM program to assess form when the Actual Local Sizes have not been directly inspected and calculated.

One reason that makes it difficult to implement GDT standard 100% in CMM world is that many things seem to be black and white from GDT standard point of view (e.g. ASME Y14.5) are often "grey" in real…