This occurs for geometric  characteristics that subdivide the considered feature into a set of cross sectional elements. These include certain cases of form, orientation, and runout tolerances. For these characteristics, the tolerance zones can be constrained to geometry other than datums.

Some of the rules governing element-based tolerance zones were defined in the ASME Y14.5.1M-1994 standard for Mathematical Definition of Dimensioning and Tolerancing Principles.

A Circularity control subdivides a feature into a set of circular elements, each with its own annular Circularity tolerance zone. For cylindrical features, the tolerance zones must all be perpendicular to and centered on a common spine. In this context, a spine is a smooth curve that does not intersect. This allows the orientation of the Circularity zones to follow the curvature of the actual surface.

For Circularity applied to a spherical feature, the tolerance zones must all pass through and be centered on a common center point.

A Surface Straightness control subdivides a feature into a set of line elements, each with its own strip-like Straightness tolerance zone. For cylindrical surfaces, the
tolerance zones must all be in a plane passing through the axis of the feature’s Actual Mating Envelope (AME).

For Straightness applied to a planar surface, the tolerance zones must all be parallel to the drawing view that the tolerance is shown in.

When the notation EACH RADIAL ELEMENT or EACH ELEMENT is shown underneath the feature control frame, an orientation tolerance subdivides a feature into a set of line elements. If the considered feature is rotationally symmetric about a datum axis, then the tolerance zones must be in planes that pass through the datum axis. 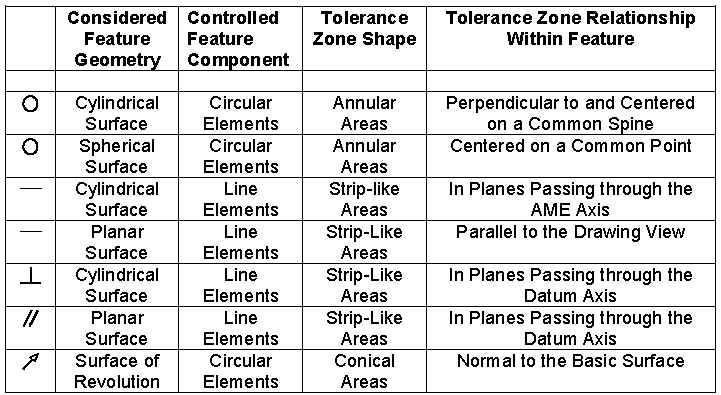 Geometric characteristics that subdivide the feature into elements pose special challenges in CMM inspection, both in programming and in the software itself.
The default algorithms in most software packages do not follow all of the detailed rules presented above, and perform a more simplified calculation instead. In many cases, the user must create custom programming in order to get a result that is closer to the optimal actual value. First, the user must lay out the measured points in a way that creates the required cross-sectional elements, and this can be a complex task. Second, the CMM program must often employ an iterative approach in which the feature is remeasured and the elements recalculated until the optimal subdivision is found. The extra programming effort adds the most value when the feature has an extreme amount of form error and will cause the simpler algorithms to give a misleading result. In most cases, the feature’s form does not cause significant algorithm errors.