Written by Curtis Brown
The Dimensional Measuring Interface Standard (DMIS) is the first data interoperability protocol standard created specifically for dimensional metrology.  DMIS applications are multi-facetted.   The standard can behave as a coordinate metrology language to execute measurement part programs, or it can be used as a neutral data exchange mechanism for part programs and measurement results.  DMIS is full featured and has many successful implementations. It also has a strong reputation as a progressive standard, one that has been responsive to user needs and technology advances.  It is maintained and improved upon by a volunteer committee, the DMIS Standards Committee (DSC), under the auspices of the Dimensional Metrology Standards Consortium (DMSC Inc.).  DMIS has progressed as its eighth version and its sixth as a national and/or international standard.  Some notable advances of DMIS have included:
•  support for thin-walled (i.e., sheet-metal) measurements
•  alignment with American and International tolerancing standards
•  complete suite of measure features
•  harmonization with complementary standards and specifications
•  extension of additional sensors and scanning processes
•  introduction of measurement uncertainty computations
•  tighter CAD associativity
•  enhancements for multi-axis scanning
•  provisioning for functional subsets (application profiles)
•  progression of conformance class validations
•  designation of key characteristics with criticality designators
•  removal of ambiguities and syntactic limitations
•  clarification through additional diagrams and code fragments
•  resolution to over 600 standard improvement requests
What is DMIS?
DMIS defines a neutral language for communication between information systems and dimensional measurement equipment (DME). DMIS is an execution language for measurement part programs and provides an exchange format for metrology data such as features, tolerances, and measurement results.
DMIS conveys the product and equipment definitions along with the process and reporting information necessary to perform dimensional measurements that employ coordinate metrology.  DMIS contains product definitions for nominal features, feature constructions, dimensional and geometric tolerances, functional datums, and part coordinate systems. DMIS also associates and designates the criticality of key characteristics of tolerance(s) with feature(s).  It communicates equipment definitions for various measurement sensors, measurement resources, and machine parameters. DMIS instructs the DME and/or sensor’s motions and touch probing or scanning measurements for product acceptance or verification and for manufacturing process validation and control. Furthermore, DMIS guides the analysis of coordinate data to report and tag measurement results that ascertain product/process quality.
Also, DMIS addresses the associativity of DMIS product definition entities with CAD information.  Finally, to aid in its implementation, application functional subsets of DMIS have been defined that ensure successful interoperability and to validate DMIS conformance.
DMIS Progression
DMIS Major/Minor Words
Since DMIS statements are based upon major and minor words syntax, one metric for conveying the maturation of the DMIS standard is through the number of DMIS major and minor words.  The table below shows the growth of DMIS major and minor words from its first ANSI standard version 2.1 in 1990 through the recently-approved DMIS 5.2 standard also known as ANSI/DMIS 105.2-2009, Part 1. 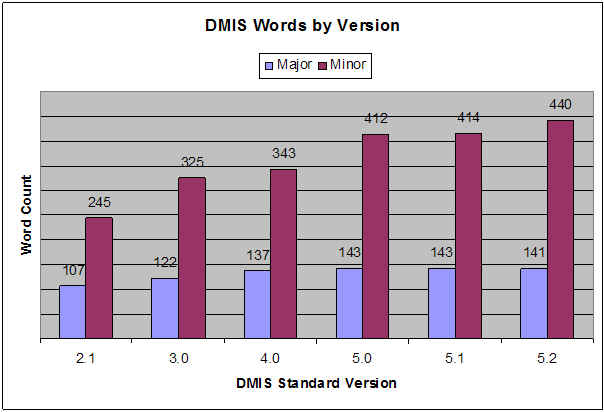 Measure Features
Another metric to evaluate DMIS progress is a review of DMIS-supported measure features.  Below is a table identifying DMIS measure features, their availability in DMIS 2.1 through DMIS 5.2, and their corresponding DMIS syntax.
Some measure features of note:
Thin-Walled Features
DMIS 3.0 introduced many thin-walled measurement concepts.  It not only introduced the concept of a relative measurement and a profile of a point tolerance, but it also extended the DMIS 2D feature set with a Closed Centered Parallel Lines Feature and an Edge Point Feature. A closed-ended centered parallel line feature can be rounded or rectangular.  An edge point feature defines a point on the edge of a thin wall.  Recently, an open-ended centered parallel lines feature was introduced which is a 2D implementation of FEAT/PARPLN.
Parent Features
Because measurements are used to verify requirements, tolerancing concepts must not only be reflected in the DMIS tolerances, but also in the DMIS measure feature suite.  Because a compound datum can exist on a drawing, DMIS must accommodate a mechanism to represent a compound datum from existing coincident sub features to assist in the construction of a part coordinate system.  Another parent feature is the pattern feature.  The pattern feature consists of a list of existing feature-of-size features and it to can be designated as a datum feature.
CAD Relating Feature
With the advancements in CAD systems and the strong associations now possible within them, an improved mechanism to associate DMIS features with CAD part model geometries was accomplished via the GEOM/ statement and the FEAT/GEOM feature.
Radial Segment Features
Tolerancing standards make a distinction between feature-of-size (FOS) features and radial features.  FOS features can have size tolerances and are typically located by positional tolerances along with material condition modifiers, whereas radial features are not FOS features and must be toleranced with a radial dimensional tolerance or controlled by a profile tolerance.  To accommodate the 3D radial nuances of features the DSC created radial segment features from partial cones, cylinders, spheres, and tori.  FEAT/ARCs are 2D representations of radial segment features.
Revolute Surface Feature
Because tolerancing standards allow various applications of tolerances on surface of revolution features (e.g., circularity, runout, orientation to axis) and the fact that the axis of surface of revolution can be designated as a datum, the DSC accommodated this requirement with a Surface of Revolution feature.
Slot, Wedge, and Elongated Hole Features
From the beginning, tolerance standards described non-diametrical FOS features that are located by its center-plane and sized by a width tolerance.  DMIS has always accommodated the most common non-diametrical FOS feature, an opposite parallel planes feature (FEAT/PARPLN), which is often described as a slot, tab, or block.   In addition, DMIS accommodates two other opposite symmetric surface measure features described in tolerancing standards, namely an opposite symmetric radial segments feature (i.e., elongated hole) and an opposite symmetric planes feature (i.e., wedge).
Recent 5.X Changes
Multi-Axis Scanning Enhancement
With the recent advent of multi-axis scanning with a continuously indexable probe head or an inspection robot, a DSC Multi-Axis working group was created to be the first to accommodate this new capability.  This new functionality requires that the motion of the sensor not only be controlled by the CMM frame but also it must explicitly control the  sensor hardware during both motion and measurements.
Key Characteristic with Criticality Designator
The new KEYCHAR statement provides a means to uniquely identify an association between nominal feature(s) and nominal tolerance(s) with an optional criticality designator. That is, one or two previously defined tolerances can be associated with one or more defined features and can be assigned with a MINOR, MAJOR, or CRITICAL criticality designator.
Open-Ended Parallel Lines Feature
Recently, syntax for an open-ended centered parallel lines feature was introduced.  This is basically a 2D implementation of FEAT/PARPLN.
Alignment with ISO Tolerances
Significant harmonization was performed on tolerances described by ISO standards.
Introduction of Measurement Uncertainty
Metrologists recognize that all measurements have uncertainties, and these uncertainties can play important roles in the assessment of conformance to design specifications and in the establishment of traceability of measurements to national and international standards.  For dimensional metrology, it is necessary to associate with each toleranced parameter or key characteristic its uncertainty at a specified level of confidence.  The DSC has made accommodations for the designation of metrology algorithms and decision rules via DMIS statements.  Please review the accompanying article on measurement uncertainty.
Syntax Restrictions
The DSC removed syntax limitations on line length and label names.
DMIS Conformance Classes
The DSC has spent significant efforts toward formally recognizing characterized subsets of DMIS, as known as application profiles.  The primary benefit of any DMIS profile is the ability to insure interoperability against a conformance class through the use of validation tools.  Please review the accompanying article on DMIS Conformance.
Future
The current pedigree of the DMIS standard is based upon an APT like syntax structure.  This structure provides a useful and easy human-readable syntax; however programming languages as well as information technology have progressed into next-generational languages.  Therefore, the DSC is currently investigating requirements for a next-generation DMIS (NXDMIS).
Mechanisms for Change
Mechanisms for change to the DMIS standard include active participation in the DMSC as a supporting consortium member, volunteering as a DSC member, and/or the submission of Standard Improvement Requests (SIR).  The DSC would value your participation and interest.  Please visit the www.dmsc-inc.org website for further details.
By Curtis W. Brown
DMIS Standard Committee Chairman
Principle Engineer
NNSA’s Kansas City Plant
Operated by Honeywell FM&T
Kansas City, MO, USA
You may be interested in:

The NIST DMIS Test Suite Can Work for You