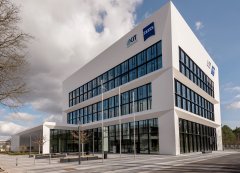 AI as a Game Changer in CMM Programming

The Coordinate Measuring Machine (CMM) remains the ‘go-to’ dimensional measurement solution throughout manufacturing industry, from job-shops to high volume manufacturing industries, ensuring the quality and conformance of components and products to their original design intent. Despite the rise of alternative measurement technologies in recent years, the CMM still remains loyal in delivering very high accuracy, repeatable results, and at what remains a very affordable investment.

Frustrations have endured with CMMs over decades from Plant Managers, Quality Managers and Manufacturing Engineers alike, not with the indisputable results that churn from the CMM, but more often from the associated frustrations with their inability to obtain timely measurements. The late availability of inspection programs for new part introductions and support of new model launches, and the bottlenecks that ensue when parts must be measured manually, are the major source of the negative thoughts aimed towards the CMM. CMM inspection results, generated under automatic measurement, take a few minutes or on the most complex part, less than one hour. The cause of these CMM frustrations have long been CMM programming and program validation – a task for CMM specialists and, until very recently, few automation tools were available to speed up the programming process which can take many days to complete.

Offline CAD based CMM programming tools have been available for CMMs but require the identical skillset to that required to program the physical part at the machine (and maybe even more) and rarely did an offline generated inspection program deliver a ‘right first time’ inspection program.

Metrologic Group, with its very latest METROLOG and SILMA X4 suite of software, has unleashed a revolution in CMM programming removing the inherent frustrations and delays, and delivering fully proven inspection programs to the physical CMM in a fraction of the time typically previously needed. 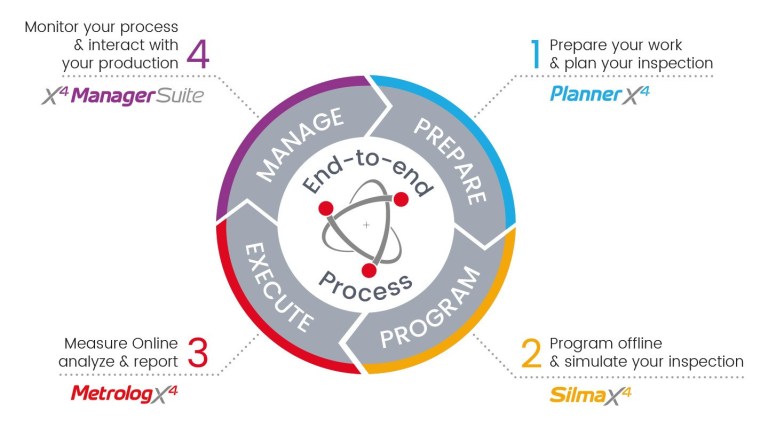 SILMA X4 is not only a unique programming tool.  It delivers the best digital twin experience since it simulates the full real environment and machine behavior in a virtual world.  This allows users to focus on their offline work without needing at all to access the physical CMM machine.  Though this is virtual, this is reality for all SILMA end users today!

SILMA X4 has been developed to not only create and simulate CMM part programs, but also to entirely validate and troubleshoot them using advanced probing, measurement routines and constructions. The integrated collision detection and automatic collision removal tools provide the ability to visualize, optimize and update readily the entire CMM sensor path.

The key to SILMA’s remarkable CMM programming productivity lies with incorporating the ability to extract Digital Product Definition data directly from the CAD model – which is then productively utilized in what has become a much simpler and extensively automated CMM programming exercise. The extraction of GD&T data directly from the embedded part CAD model, provides SILMA X4 with the component’s intellectual intent for part inspection directly from its original design data.

SILMA X4 incorporates a pre-programming ‘Inspection Planning’ task whereby all features, constructions, and tolerances are extracted directly from the CAD model and added into its relational database.

The repository of all user recipes, best practices and know-how can be fully integrated in the software as a knowledge hub.  Not only does this result in an easier full program creation, but it also allows the program to be always consistently created automatically, independently of programmer and fully adapted to the part, type of machine, and technology used to perform the measurement.

Additionally, as part of the rules, the Artificial Intelligence of SILMA X4 allows inspection reports,  uniquely generated upfront at this initial planning stage simply by ‘drag and dropping’ from the database into the report environment seamlessly, allowing for the powerful graphical displays of measured data to be created. Since the reason for measurement is to generate part data, it is logical that the report is created first and the subsequent CMM measurement programming driven from the required data output. (This is the inverse of the typical traditional programming process.)

Part alignment features are automatically identified by the software, removing traditional CMM programming’s most complex task. SILMA’s advanced algorithms generate automatic programming functionality including the determination of the minimum required sensor orientations, minimization of machine motion to measure all selected features, measurement cycle-time optimization along with automatic inspection program generation. Even the inspection programs required for the most complex prismatic parts can now be generated in just a few minutes.

In these COVID times ‘hands-on’ physical part CMM programming at the machine has added another layer of risk management. SILMA’s virtual CMM programming solution is not only significantly more productive, it allows remote CMM programming even from home, safely and efficiently. By eliminating the use of the CMM as a programming and program debug tool, thanks to SILMA, the CMM can continue to operate full-time as a productive measuring device.

Don’t change the measuring system – Change the way it works

The METROLOG X4 platform includes SILMA X4 CMM planning and programming module, METROLOG X4 CMM measurement software capable of running directly on all existing OEM CMM controllers (fully capable to connect to more than 120 type of different type of devices today – the most versatile and universal solution available on the market)  or can be installed as a complete CMM retrofit with a new DCC controller facilitating the integration of new sensor technology, and the X4 Manager Suite providing a data management solution allowing collaboration and support of decision making on the factory-floor by providing real-time access to 3D measurement data.

“Our innovative ‘End-to-End’ approach to CMM measurement will change the face of manufacturing industry reducing the total cost of CMM ownership by eliminating metrology silos, inefficient workflows and facilitating greater collaboration between teams, ensuring consistency of measurement results, while increasing workforce mobility” states Bertrand Gili, President of Metrologic Group. “With our ‘End-to-End’ process, manufacturers can opt for a single step with our modular approach which allows to simply pick a ‘missing piece’ as we can integrate with all other software currently used on CMMs. Not only our software solutions are versatile, agnostic, but they also deliver added value to our customers and let them pick the missing solution or software they have not been able to get from their preferred vendor.  SILMA is a great example as it can be used in conjunction with many other software at customer’s location and still run the CMM without disrupting the CMM lab organization since offline can be carried somewhere else…”

Metrologic Group is running online demonstrations of SILMA X4, presenting the full productivity benefits, and how CMM bottlenecks can be eliminated forever with the advanced automated generation of CMM inspection programs.

Have you ever needed assistance while programming? Or need additional training of one topic and didn't need or want to re-take a training class? You've needed someone just to look over your shoulder to…