Determining the Shape and Size of a Tolerance Zone

n the previous article, we saw that all geometric tolerance specifications control a particular component of the considered feature.

Now we will see that a geometric tolerance specification also defines a tolerance zone, that the controlled component must conform to.  The tolerance zone has well-defined shape, size, and degree of freedom constraints.  This article will focus on the shape and size aspects. 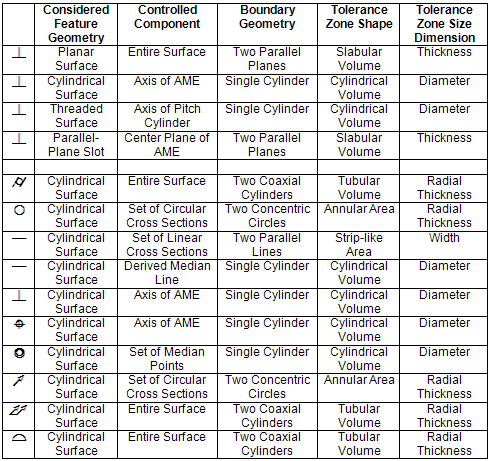 As can be seen in the above table, different geometric tolerances can result in the same tolerance zone shape for a given controlled component.  For example, Circularity, Total Runout, and Surface Profile all result in a tubular tolerance zone when applied to a cylindrical surface.

The distinction between each of these geometric controls lies in the different degree-of-freedom constraints that they impose on the tolerance zone.  This will be discussed in future articles.